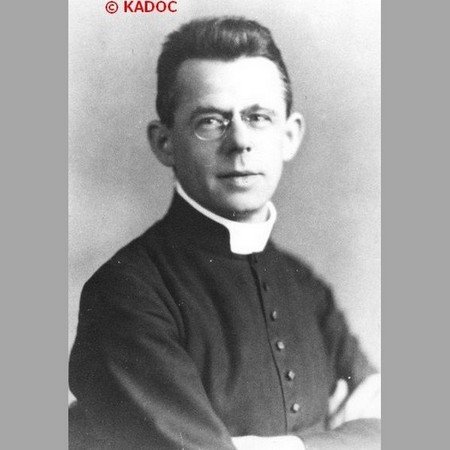 Léon Joseph Cardijn was born on 13 November 1882 in the booming Brussels suburb of Schaerbeek. However, he grew up at Halle, a Flemish town fifteen kilometres away, helping his father deliver sacks of coal that he ‘pulled over the cobbles’ of local streets.1In daily contact with the working families who supplied labour to the surrounding industrial estates, he rapidly developed a keen social conscience.

‘We often spoke of the factories in neighbouring communes,’ he later recalled, ‘particularly the artificial silk factory at Tubize which attracted many young girls and women, who, intoxicated by ether fumes, prostituted themselves in the field next to the factory.’2 ‘My father was terribly affected,’ Cardijn remembered. ‘It was then that it came to my mind to do something for these poor boys and girls. It was the time of Rerum Novarum. I was nine years old.’3

Although many of those concerned with these issues were doctrinaire socialists, activist priest, Fr Adolf Daens, was not. ‘The worker must be neither a slave nor a beggar,’ Daens proclaimed, ‘he must be a free and prosperous man.’4But his progressive politics and his candidature for parliament earned him the enmity of the conservative Catholic Party leader, Charles Woeste, who lobbied successfully in 1899 to have him stripped of his priestly duties.

Nevertheless, Daens had succeeded in inspiring a priestly vocation in the mind of the teenage Joseph Cardijn, who entered the Malines minor seminary in 1896. Returning home for holidays nine months later, he made his first shattering ‘discovery of the problem of working youth’ among his former communion classmates, who had gone to work in the factories near Halle. ‘I found them already corrupted, opposed to the Church and no longer wanting to associate with me,’ he later explained. ‘It was a dagger blow to my heart, and I began to seek the causes of this loss and corruption, and I promised to devote myself to saving them.’5

Intriguingly, it was during this period that the teenage Cardijn first began to read the writings of ‘L’Ecole Mennaisienne,’ the school of Catholic writers and activists named for the French priest, Félicité de Lamennais, whose ‘Dieu et liberté’ (God and freedom) motto had helped inspire Belgium’s independence movement in 1830. Indeed, Cardijn’s own letters from the seminary echo many Mennaisian themes. ‘The greatest goal of your life: God, the Church, the People,’ Cardijn wrote to a friend in 1903.6

Meanwhile, a further shock awaited him. On 24 May 1903, he was called home to the bedside of his father, Henri, who was dying prematurely of overwork. Overcome with emotion, the 20-year-old seminarian vowed to consecrate his life to the working class, a moment that decided the whole ‘apostolic orientation of my priesthood,’ as he recalled.7

A brilliant student, Cardijn topped his class regularly. Although he retained a thick Flemish accent, he delighted in French literature, avidly reading the works of the mostly French ‘social Catholics.’ Moreover, he displayed a genuinely philosophical bent, absorbing the writings of authors including Lamennais, Alphonse Gratry and Léon Ollé-Laprune as well as British writers John Henry Newman, William James and Herbert Spencer.8

The Malines major seminary was then ‘in full effervescence,’ Cardijn noted:

It was the time of Loisy and modernism. The new methods of biblical theology, history of the Church and even of dogmatics; as well as journalistic activities including contact with the leaders of the social movement, the Flemish movement, with the Sillon, the ACJF and the Social Weeks in France, all this orientation, this theological, apostolic and social renovation, led to study circles, inspired meetings and provoked reading and enthusiastic discussion. It was an apprenticeship in word and action.9

But it was not all plain sailing. Pope Leo XIII’s long, relatively liberal pontificate ended in 1903. Thus, Cardijn began his theology studies under Pius X, who immediately made clear his intention to crack down. Yet far from discouraging him, the change of environment seems to have spurred Cardijn. ‘I need to know my theology in depth so that I can defend it in front of anyone,’ he wrote to his friend Emile Possoz, while other letters revealed a growing consciousness of his ‘social vocation.’10

Around this time, Cardijn first encountered the Sillon, the lay democratic magazine and movement founded by Marc Sangnier, then taking the French Catholic world by storm. ‘You would need to appreciate the loving capacity of a virginal heart aged twenty to understand the explosion of enthusiasm that such reading could inspire in the soul of a young seminarian!’ Cardijn later told Sangnier.11

He completed his studies and was ordained by the new archbishop of Malines, the future Cardinal Désiré Mercier, on 22 September 1906. Mercier was clearly impressed by Cardijn’s talents, sending him to the University of Louvain to study social sciences at the Institut Supérieur de Philosophie.12 Yet Cardijn was disappointed with many professors, finding their courses too theoretical – and perhaps their Thomism too narrow – in the face of the serious social problems.13

The main exception here was the Louvain economist and sociologist, Victor Brants, an enthusiastic but critical disciple of the French sociologist, Frédéric Le Play, whose method of social observation or enquiry method foreshadowed Cardijn’s see-judge-act. Taking Cardijn under his wing, Brants sponsored study trips to Germany and France in 1907 for his promising pupil.

In France, Cardijn finally made direct contact with Sangnier and his increasingly controversial movement. Upon his return to Louvain, however, an unpleasant surprise awaited him. Undoubtedly desiring to teach discernment and patience to the fiery young priest, Mercier had cut short his studies and was sending him to teach Latin at a rural minor seminary in Basse Wavre.Although devastated, Cardijn obeyed unhesitatingly, later regarding his banishment as ‘providential’ and the best possible preparation for his future apostolate.14

Not until 1912, when he was finally appointed as a curate in the parish of Notre Dame at Laeken, would the opportunity arise to implement the lessons he slowly absorbed. Meanwhile, the enforced five-year retreat shielded him from the conflicts that engulfed his beloved Sillon and ended in its tragic closure in 1910.

6Cardijn to Possoz,” 08/03/1903, quoted in Marc Walckiers, “Joseph Cardyn jusqu’avant la fondation de la JOC, Vicaire à Laeken, 1912-1918, directeur des oeuvres sociales de Bruxelles, 1915-1927.” (Ph.D. thesis, Université catholique de Louvain, 1981), 45. (Note the alternative spelling of the name Cardijn as “Cardyn”, which was the French version of his name. As he began to travel internationally, however, he abandoned use of the French version and simply called himself “Cardijn.”